About: Alice explores Earth surface processes with her students, especially the interactions between climate, glaciers, and geomorphology. As an undergraduate, she found the Earth sciences particularly appealing, in part because of the huge spatial and temporal scales but mostly because of all the unanswered questions. Through her M.Sc. in dating moraines and her Ph.D. in palaeoclimate reconstructions via numerical modelling of glaciers, she continues to pursue answers to one of the last big questions in the Earth sciences: What causes ice ages? Her research integrates multiple natural systems (e.g. climate cycles, glacier response, the biosphere, and tectonic processes) for a more complete understanding of past climatic events. She is grateful for opportunities to share her enthusiasm of Earth and climate sciences with others.

Teaching: Alice teaches introductory geology courses as well as upper level courses relating to surficial processes.  Through these courses, students make observations, solve calculations, take measurements, and report their findings while doing hands-on experiments and field trips.  Alice combines her favorite Earth science methods of GIS mapping, laboratory sedimentary analysis, and field reconnaissance to inspire students to be curious about what rocks on the surface can tell us about the past.

ICE AGE GLACIERS IN UGANDA:  Alice received funding from the National Science Foundation in 2017 to continue her research on modeling glacier extents in the Rwenzori Mountains of Uganda.  Her team focused on the timing of when glaciers were at their maximum extents in the past and the amount of cooling required to advance these glaciers.  She reconstructed past glacier extents using a numerical glacier model and found that the magnitude of cooling these glaciers needed to advance to their ice age extents is much greater than the magnitude of cooling at sea level.  This difference indicates that the rate of temperature change with elevation (lapse rate) was steeper during the ice age, which caused amplified cooling at high elevations (2000-5000 meters above sea level).

AVALANCHE-FED GLACIERS IN NEW ZEALAND:  Glaciers are similar to bank accounts, mass in (i.e., snow) equals mass out (meltwater) when the glacier is in equilibrium.  Alice worked on glaciers with relatively high mass in: mass out ratios, and the most extreme example of this was a low-elevation glacier (almost entirely in the melt zone) that survived because it received a substantial flux of snow from avalanches off the surrounding valley walls.  She incorporated a mass transport and deposition parameterization into her glacier model to account for this mass flux and is curious if the high mass in: mass out ratio influences this glacier’s response to climate. 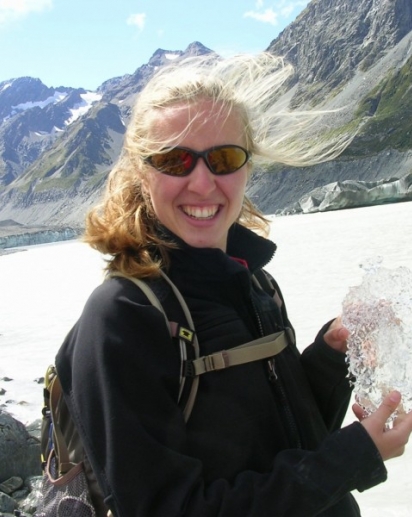